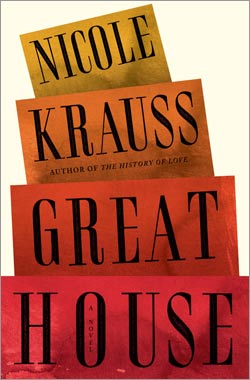 I went to St. Paul last night to listen to Nicole Krauss at a session of Minnesota Public Radio’s “Talking Volumes” series.  Krauss has been nominated for the National Book Award for her third novel, Great House. (Read The New York Times review of the book. )

At events such as these, someone invariably asks about the author’s creative process, how he or she writes.  Authors often have a very hard time coming up with an answer.  That, or they’re sick of the question. And since, it’s a very abstract process, the answer is usually not very satisfying.  I’d rather hear more generally about the ideas the author wants to convey than about her methods. However, Krauss speaks about as well as anyone I’ve ever heard on the subject of the writing process.  She’s as articulate in a conversation as she is on the pages of her books. Krauss says writes as she goes, without a lot of outlining.  She seems to go where the writing takes her.  She revises as she writes so at the end of the process, she has mostly a finished product. “I make the doorknob first, then the door, and the room,” she said in describing her writing process. “Only much later do you step back and see the whole house.”

She spoke about how, perhaps because she’s a writer, it’s sometimes difficult to find books that totally carry her away, the way books affected her as a child.  However, she raves about Israeli writer David Grossman and his book To the End of the Land. “It blew my mind,” she said. I’m eager to pick that one up and suggest it to my book club. (See the New Yorker article about Grossman.)

I also enjoyed a PBS Newshour interview with Krauss last week.  Interviewer Jeffrey Brown ended the interview with, “Finally, sort of on that subject, I can’t help but notice the centrality of books and literature to many of the characters in this novel. A couple of them are writers, others are really great readers. We don’t seem to live in a time where that’s true for most people anymore.”

Krauss responded, “It’s certainly true in my life. I think I am who I am because of the books that I read, and I think of myself still as first and foremost a reader and then following that a writer. But I’m aware that both in my last novel The History of Love, where there was a book that was a center that connected all the characters, and now here is this desk, which is at least one of the components that connects, that these are objects that are saturated with the possibilities of literature. I do feel like I’ve staked my life on this, which is this idea that literature affords us this absolutely unique possibility in no other moment in life. Really, I think again in no other art form can you step so directly, so vividly without any mediation into another’s inner life. You are stepping fully into this stream of what it is to be another person. And I think when you do that, you inevitably form a kind of compassion. It teaches a kind of empathy. So for me this is like a great value of literature. It’s also again for me, somebody who’s obviously — all my characters are often solitary, they’re struggling with that solitude, but they are not content with it. They would like to move beyond it, to transcend it to express themselves to others in a way that I think they all feel is possible. And it’s no accident that literature becomes a kind of singular way for many of them to do that.”

Empathy, compassion, what it’s like to be another person… Makes you wish more people would pick up a book.

See her conversation with Brown at http://www.pbs.org/newshour/art/blog/2010/10/conversation-nicole-krauss-great-house.html And look for a video and transcript of Krauss’s “Talking Volumes” interview to appear soon the MPR Web site.http://find.publicradio.org/search?site=mpr&proxystylesheet=mpr&client=mpr&output=xml_no_dtd&filter=p&numgm=5&q=talking+volumes&x=14&y=14