I went to Books & Bars Tuesday night in Minneapolis at the Bryant Lake Bowl to
experience a fresh take on the traditional reading group, billed as “not your mother’s book club.” I went alone, but my visit confirmed why Msp.St.Paul magazine ranked Books & Bars as one of the best places for a newcomer to the Twin Cities to visit. I chatted it up with the people around me, all very hip and Uptown-looking and all very welcoming to a newbie.

The place was packed and with 90 or so people who discussed To Kill a Mockingbird with beer-fueled gusto—everything from the civil rights movement and the book’s relevance 40 years after its publication, to women’s roles, Atticus Finch’s parenting skills, and why we love Boo Radley. There were quite a few enthusiastic and thoughtful English teachers in the group and the conversation was free-wheeling. My favorite comment of the night was from a guy who said the best 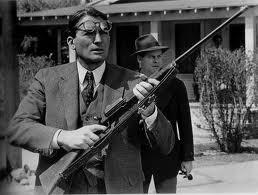 part of the book was when Atticus “shot that dog.”

The genial Jeff Kamin (henceforward, Genial Jeff in my mind) does a great job as the group’s host/facilitator/comedian. He alternately encourages participation from those who haven’t spoken, keeps the talkative from monopolizing the conversation, and injects new points of discussion.  He also tempers conflicting points of view with a little humor—skills I hope to emulate when my relatives gather during the upcoming holidays.

I asked Kamin why he thinks Books & Bars has been so successful.  He explains, “People like to read books, drink cheap beer ($2 Surly/$3 Fulton) and publicly express their opinions. And if they don’t want to talk, they enjoy hearing others talk about what they’ve read. It’s always a lot of fun. I do my best to keep everyone entertained and informed. People like to get out with like-minded types. The books have to be good, or at least discussion-worthy, but ultimately I think people come for the other people. They want to connect. And they want to laugh.”

For many, such face-to-face “networking” over a common topic is a welcome respite from the online social networking world. He says, “We have over 1000 fans on Facebook and almost as many newsletter subscribers. As much as I love to tweet and update my status and get a good on-line forum discussion going, nothing can compare to sharing a table, a meal, raising a glass with a friend and looking them in the eyes when you make fun of them. And hearing the agreeing laughter of the others around him.”

Another reason for the group’s success (it has expanded to twice-monthly and two locations) may be the mix of people, which is quite a departure from “your mother’s book club.” A surprisingly high number of men attend Books & Bars. The crowd is usually about 60/40 female to male depending on the book choice, and mostly 20-somethings, but with a few “women-of-a-certain age,” as the French say, in the mix.  “We have a few mother/daughter and a mother/son teams every once in a while,” says Kamin. “I’d love to see more father/son readers give us a try. I actually pick more male authors than female in the hopes of balancing our membership.”

Another draw is the mix of books.  I have to admit there are a lot of books on the B&B reading list I haven’t heard of.  It’s also pretty cool that they sometimes do Skype sessions with authors at their meetings. “We do a classic every year, but try to shine a light on the lesser known, but equally deserving authors, too,” says Genial Jeff. “I love that we get 100 people together to discuss a book instead of reality TV around the water cooler. We’re reinventing the book club and bringing back literature as a topic of discussion.”