I recently attended a gathering at the University of Minnesota, through its Learning Life 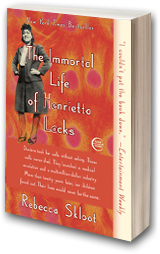 series, where Jeff Kahn, director of the University’s Center for Bioethics, discussed Rebecca Skloot’s The Immortal Life of Henrietta Lacks. For anyone who hasn’t read Skloot’s huge bestseller, here’s the Amazon description:

Henrietta Lacks was a mother of five in Baltimore, a poor African American migrant from the tobacco farms of Virginia, who died from a cruelly aggressive cancer at the age of 30 in 1951. A sample of her cancerous tissue, taken without her knowledge or consent, as was the custom then, turned out to provide one of the holy grails of mid-century biology: human cells that could survive–even thrive–in the lab. Known as HeLa cells, their stunning potency gave scientists a building block for countless breakthroughs, beginning with the cure for polio. Meanwhile, Henrietta’s family continued to live in poverty and frequently poor health, and their discovery decades later of her unknowing contribution–and her cells’ strange survival–left them full of pride, anger, and suspicion.

Kahn started the evening by admitting that Skloot had contacted him when she was doing research for the book and he told her that she shouldn’t bother to write the story, everyone already knew about HeLa cells.  It’s good she didn’t take his advice. As a science writer, I admire Skloot’s tenacity, not only in ignoring the naysayers, but also in winning the trust of the Lacks family to get their story; it took her ten years.  I also admire the way she has woven together both the science and human-interest sides of the story to make a really readable book.  That’s the biggest challenge for science writers because straight science is really, really dull. Some people at this session thought Skloot had become too involved with the family and inserted herself into the story too much. I disagree.  A personal relationship was necessary to gain the confidence of the family and it seems like she has taken care not to exploit them. In fact, she donates a portion of her book’s proceeds to the Henrietta Lacks Foundation, which she created to provide financial assistance to needy individuals who have made important contributions to scientific research without their knowledge or consent.  That should be a fairly sizable amount of money because Skloot’s book has been on the bestseller list for months and Oprah has bought the option for a movie.

Kahn offered a bit of background on how researchers have exploited disadvantaged people.  Some experiments were quite barbaric.  These include the Tuskegee Institute study of untreated syphilis in black men, an experiment at the Willowbrook State School (on Staten Island) in the 1960s which exposed mentally retarded children to hepatitis, and another 1960s experiment at New York’s Jewish Chronic Disease Hospital in which vulnerable patients were injected with cancer cells.  These have all led to a mistrust of healthcare among groups who have been exploited. We discussed how slowly laws regarding consent, privacy and other ways of protecting human research subjects lag behind the science.  During Henrietta Lacks’s time, there were no such laws.

Here are a few other questions to think about if you pick up the book:

-Do you think the Lacks family deserves some financial benefit from Henrietta’s cells?Courts have ruled that it’s not the cells that have value in such situations; it’s the intellectual property created by science that has value.

-How is this any different than selling organs? The only person that doesn’t receive a benefit from the current transplant system is the donor.

-Should companies be able to patent and profit from a person’s DNA?

-Are we appropriately concerned with the ethics of using animals in scientific experiments?

-What ethical considerations and laws have changed since the 1950s?  What have we gained as a matter of morality?

As bioscience moves forward with increasingly complex technology, ethicists such as Kahn will have plenty to keep them busy.  To me, the saddest and most challenging ethical issue of this story isn’t as much about science as it is about education and the appalling knowledge gap between rich and poor. Especially in health care, ignorance puts the uneducated at a great disadvantage. That’s an issue for which we are all ethically responsible.

One thought on “Ethics and Henrietta Lacks”