I took a walk last week through the Summit Hill neighborhood of St. Paul, Minnesota,

where F. Scott Fitzgerald was born, grew up, wrote his first stories and made the revisions on his debut novel, This Side of Paradise. (If its original not-so-catchy title The Romantic Egoist is any indicator, I can see why they suggested revisions)

Even if you’re not a big Fitzgerald fan, even if you don’t know Amory Blaine from Jay Gatsby, this is a great neighborhood for a stroll, especially in summer. With its gorgeous Victorian homes, overarching elm trees and fun shops nearby it’s—if not this side of paradise—really, really nice.

The St. Paul Public Library (which has a special Fitzgerald reading alcove) offers a brochure called “F. Scott Fitzgerald in St. Paul—Homes and Haunts” that you can download. Start the tour at 481 Laurel Ave., where Fitzgerald was born. Park there and start the walk. The house where his parents later lived (593/599 Summit) and where he finished This Side of Paradisehe described as “A house below the average on a street above the average.”

Published in 1920, this work launched his career as spokesman for the Jazz Age. He chronicles the changing mores of the generation of wild children of Victorian parents, who Gertrude Stein later dubbed the “Lost Generation.”  Fitzgerald presciently wrote in the most famous passage of the novel, “Here was a new generation, . . . dedicated more than the last to the fear of poverty and the worship of success, grown up to find all Gods dead, all wars fought, all faiths in man shaken.”

Be sure to make a stop at W.A. Frost (374 Selby), which has the world’s best outdoor dining, part of your tour.  Frost’s was a drug store and soda fountain during Fitzgerald’s day and retains its historic charm.  Finally, end your tour across the street from W.A. Frost at Common Good Books (downstairs at 165 Western Avenue North), whose proprietor is another St. Paul author and host of “A Prairie Home Companion,” Garrison Keillor. It’s a gem of a bookstore.  To read more of Fitzgerald’s St. Paul works, look for The St. Paul Stories of F. Scott Fitzgerald, edited by another St. Paul author, Patricia Hampl.  Read “The Ice Palace,” “Winter Dreams,” and “A Night at the Fair.” 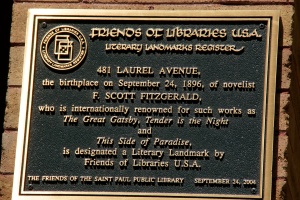 5 thoughts on “An F. Scott Fitzgerald Walk in St. Paul”