My book club is reading The American Heiress by Daisy Goodwin this month.  It’s a fairly 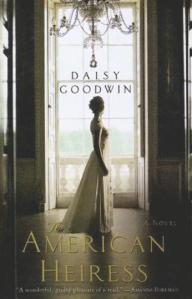 light read, but just right to get any fan of Downton Abbey primed for the launch of season three this Sunday, January 6, on PBS.

Americans have a long-standing fascination with the British aristocracy. For example, while millions of Londoners piled in around Buckingham Palace to enjoy the festivities surrounding Kate and William’s wedding in 2011, there were probably an equal number of Americans (clad in funny hats) who stayed up all night to watch all the pomp and romance of the royal wedding on TV. And, we’re totally hooked on Downton Abbey,  the story of  life in the Edwardian country house of the Crawley family and their cadre of servants that has become stratospherically popular, I mean Justin Bieber popular.   Through the American Heiress, and other books, most notably, Edith Wharton’s The Buccaneers, American readers have a special connection to the Downton drama. Here’s why:

Before the fictional Cora became Downton’s Lady Crawley, she was the beautiful daughter of a dry-goods multimillionaire from Cincinnati. In the real world of the late 1800s, similarly wealthy American families, especially the newly rich who had yet to scratch out a place in

outrageously closed and rigid social world of this country’s wealthy elite, (the “500” of Mrs. Astor), looked across the pond to forge their reputations. The young women of these families became known as “buccaneers.” Marriage to a British aristocrat brought status to the social climbing wealthy Americans and their wealth brought an infusion of vital cash to the increasingly impoverished British aristocrats, who because of taxes and inheritance rules, were forced to cast a wide net to find relationships that could bring new wealth to support their estates. A win-win?  As you’ll see from the following book list, not always.

To Marry an English Lord, by Carol Wallace and Gail MacColl, offers an excellent nonfiction look at these buccaneers who inspired the Downton Abbey series. 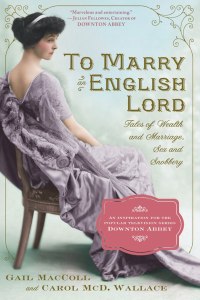 The Gods of Newport by John Jakes, about life among the wealthy in Gilded Age Newport, Rhode Island.

Amanda Mackenzie Stuart, Consuelo and Alva Vanderbilt: The Story of a Daughter and a Mother in the Gilded Age. The non-fiction story of how Consuelo Vanderbilt was forced  into a loveless marriage to the Duke of Marlborough.

Also, any of Edith Wharton’s other classics such as The Age of Innocence, The House of Mirth and The Reef, offer a great look at life among America’s Gilded Age elite.