It’s 33 degrees here in Minneapolis, a might nippy for the Minnesota Twins 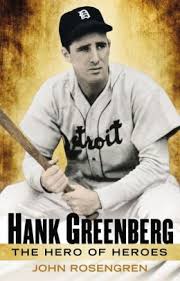 home opener. I suspect there will be more hot coffee ordered in the stands than cold beer, and fans will wear hats and mittens instead of their usual sun screen.  Nonetheless, things will warm up soon and for lovers of Major League Baseball everywhere ‘tis the season to both take in a game and to check out the latest additions to the library of baseball lore.

The best baseball stories make great literature even if you’re not the most devoted baseball fan.  They’re always stories of moral crises, human foibles, victory, defeat, and ultimately the character of America. Minneapolis author John Rosengren has his own contribution on deck, just in time for the season opener, Hank Greenberg: The Hero of Heros.  Greenberg, a Hall of Famer, played in the 1930s and 40s, primarily as a first baseman for the Detroit Tigers (who incidentally, the Twins will play this afternoon). One of the great power hitters of his generation, he racked up home runs and RBIs the way Hillary Clinton has logged frequent flyer miles. But what Rosengren zeros in on, and what makes the story most interesting, is Greenberg’s integrity in the face of the intense religious and racial bigotry of the times. He was the first Jewish superstar in professional sports and played against the backdrop of the Hitler era, the anti-Semitism of Detroit’s Henry Ford, and that of his own teammates. Greenberg became the center of national attention in 1934 when he refused to play on Yom Kippur, though the Tigers needed him to win the pennant race. He was also among the first players to welcome Jackie Robinson to Major League baseball.

Rosengren will speak about his book at the National Baseball Hall of Fame  in Cooperstown, New York, on May 18, which brings me to the idea of baseball-related travel. He advocates Cooperstown as not only a must for baseball fans but also as an attractive and historic destination for those less passionate about the sport. While Cooperstown is mecca for baseball pilgrims, he also suggests a jaunt to the Louisville Slugger Museum and Factory, an iconic place in baseball history.  Of course tons of people make visiting baseball stadiums across the country a priority for their summer travel.  Check out one of the best blogs I’ve seen about baseball stadiums as travel destinations, Yards of Summer, from another Twin Citian, Tyler Sachse. He offers reviews of the parks he has visited, some great photography from his trips, and his own list of recommended baseball reads.

So, all you boys and girls of summer…. indulge your passion with a few baseball field trips. And to enhance your travel, here’s a list of baseball books, both recent and classic, to pack along.

Babe: The Legend Comes to Life, Robert W. Creamer. Our most famous baseball player ever, in the context of his times.

Bang the Drum Slowly, Mark Harris. Baseball fiction, yes, but Bang the Drum has also been called “a haunting meditation on life, death, friendship, and loyalty.”

The Catcher Was a Spy, The Mysterious Life of Moe Berg, Nicholas Dawidoff. Berg is characterized as a strange fellow who was a professional ball player, a spy during World War II, and who ended his life in poverty.

Eight Men Out: The Black Sox and the 1919 World Series, Eliot Asinof. Lance Armstrong and his USPS team were by no means the first to shock and disappoint their fans. This book covers one of all-time biggest sports scandals, set against the end of World War I and the beginning of the Roaring Twenties.

Jackie Robinson: A Biography, Arnold Rampersad. The gripping story of the first African American man to in baseball, subject of the current film 42 The Movie.

Moneyball, Michael Lewis. The book behind the movie, the story of Billy Beane, manager of the Oakland A’s, and his struggle against the conventional wisdom of baseball management.

The Natural, Bernard Malmud. The fictional story of Roy Hobbs (remember the Robert Redford movie?), considered the best baseball book of all time.

October 1964, David Halberstam.  The 1964 World Series between the Yankees and Cardinals as seen against the social and political tumult of the 1960s.

Shoeless Joe, The Iowa Baseball Confederacy, and other books by W.P. Kinsella.  This author’ books combine baseball with a rich imaginary world. (Shoeless Joe was the inspiration for the movie Field of Dreams.)

You Know Me Al: A Busher’s Letters, Ring Lardner. The hilarious fictional letters of a bush league pitcher who blames everyone but himself for his failures.