I love it when events and my reading coincide. WonderWomen, an art exhibit at the University of Minnesota’s Nash Gallery  in Minneapolis runs from now until February 14. Though they didn’t plan it that way, the exhibit came on the heels of the release of Harvard historian Jill Lapore’s new book, The Secret History of Wonder Woman, which details the weird life of William Moulton Marston, Wonder Woman’s creator and also the inventor of the lie detector test. 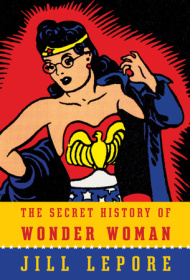 flew into American culture in 1941 and has been part of our pop culture ever since. Along with the biography of Wonder Woman and her creator, Lepore’s book is analysis of women’s history and feminism. The WonderWomen exhibit examines that topic from the pop-art perspective. It features works by women artists inspired or influenced by comics, animation or popular culture, and related screenings of work by women filmmakers presented by the Film Society of Minneapolis St. Paul. Read my article about the show in the Minnesota Women’s Press.

One of my favorite works in the show, “Wonder Woman Katy” dominates the room at the Nash Gallery. She wears a red cape and she’s seven feet tall. Don’t mess with her. That’s the image Minneapolis artist Barbara Porwit wants to convey in her Breast Cancer Superhero Portrait Project,  a series of larger-than-life paintings of real women battling the disease, of which “Wonder Woman Katy” is a part. Porwit’s works celebrate the heroic nature of women affected by breast cancer

Frenchy Lunning, a professor of liberal arts at Minneapolis College of Art and Design and an internationally known expert in manga, anime (Japanese comics and animation) and popular culture, is co-curator of the exhibit. She says, ”The takeaway for viewers is to become aware of the magnitude of feminine culture and how feminist art, with all of its potentially subversively qualities, is entering mainstream culture.”

Even if you can’t make it to the WonderWomen exhibit, you’ll want
to read The Secret History of Wonder Woman.    A New York Times review of the book called Wonder Woman’s creator “….a huckster, a polyamorist (one and sometimes two other women lived with him and his wife), a serial liar and a bondage super-enthusiast. As Wonder Woman would say, “Suffering Sappho!” How can we resist?