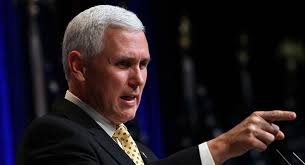 What a week for the Hoosiers! Thanks to Indiana’s Religious Freedom Restoration Act, which appears designed to allow businesses to refuse service to LGBT people, and the verbal bumbling of Governor Mike Pence, Indiana hasn’t had this much attention since Bobby Knight’s chair-throwing days at Indiana University. In fact, the issue prompted David Letterman to say he’d prefer to have Bobby Knight as Indiana governor.

I’ve watched with amusement as the right wingers in the Indiana state legislature and other areas of Hoosier life have back-pedaled and beeped like as garbage truck backing up, “Who us? No way do we mean to discriminate against the LGBT community. No, no, you misunderstand.”

Tell me what you think

And, in what is surely an April Fool’s joke, the Arkansas legislature has shown spectacular inability to learn from the mistakes of others by  passing a similar bill, despite the dustup in Indiana. Also amusing: cities and states are capitalizing on Indiana’s infamy, encouraging Indiana businesses to set up shop in their jurisdictions where they’re business- and gay-friendly. Similarly, many government entities have declared Indiana off limits for employee travel. Businesses and sports organizations are making it known that such attitudes are bad for business, business being a huge priority in Indiana— maybe even trumping “Christian” family values.

It’s funny to watch Indiana bureaucrats bumbling, but discrimination isn’t funny. For me it brings up a serious question: I’m planning to go to Indiana in a few weeks to visit friends. Should I go? Surely an individual should take a stand and be as moral as say, Emily’s List or the state of Virginia, or the mayor of Palm Beach and just say “no.” It makes me wonder what is the responsibility of individuals to protest discriminatory policies and “vote with their feet” by not going. I see I’m not the only one with this question as #banindiana and #boycottindiana are trending on Twitter.

I used to live in Indianapolis, a LONG time ago, so I know that everyone in Indiana isn’t a bigot. I have no doubt that the state will rectify its RFRA mistake by the time I get there, though Mike Pence can kiss any thought about a presidential run goodbye. Good. And the Indianapolis Convention and Visitors Bureau folks are working overtime to recover from this PR fiasco. Their web site is covered with rainbows, “All Are Welcome in Indy” banners, and they’re rolling out the rainbow carpet with a guide to LGBT Indy. Still, I’m curious what you think is the individual traveler’s obligation to stand up for what’s right? Tell me what you think.