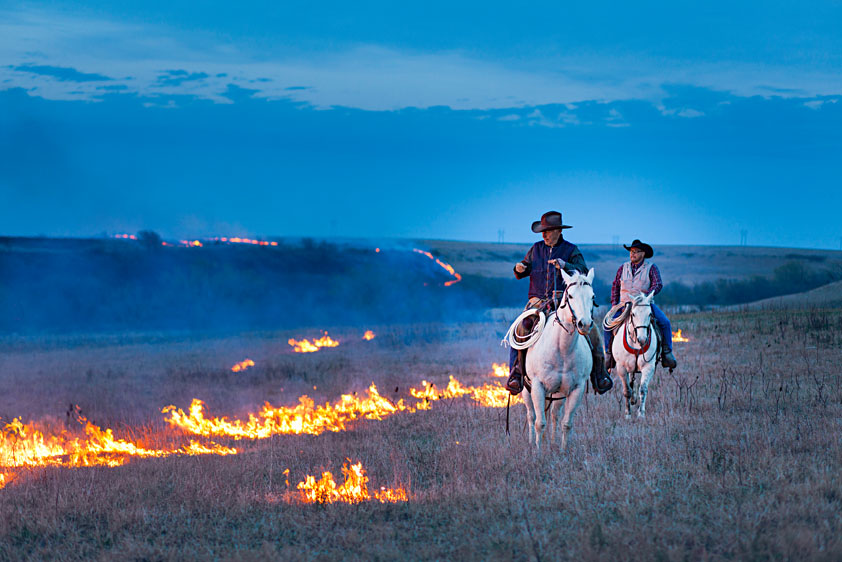 On a road trip through the Flint Hills of Kansas, travelers experience the otherworldly beauty of America’s prairie and meet the people who make the Flint Hills their home.

The middle of the U.S. seems like a featureless place, “Flyover Country” and for road trippers, “Drive-By Country,” that’s easy to dismiss on your way to a more interesting destination. Even though I live in Minnesota, which often falls in that “flyover” category, I’ve been as misguided as all the other travelers who eschew the plains and prairies for more dramatic place with mountains and oceans.  Without slowing down to look, I didn’t see the quiet drama of the land here, or the interesting people who are so proud of the land where their families have lived for generations.

Actually, if you’re looking for dramatic scenery, put prairie fires near the top of your list.

For example, on road trip to the southwest last spring, we blasted by the Flint Hills of Kansas making a beeline down the center of the country on I-35.  The only thing we noticed on the way past the edge of the Flint Hills was that much of the land was on fire.  “Those poor people,” I thought. “Their land is in flames.”  (Actually, if you’re looking for dramatic scenery, put prairie fires near the top of your list.) But I didn’t know the significance of those flames, which are far from accidental.

The Lure of the Prairie

Our trip started in Wichita, the largest city in the state of Kansas. Before the trip I read Sarah Smarsh’s bestseller Heartland: A Memoir of Working Hard and Being Broke in the Richest Country on Earth.  Her book covers many of the reasons why farm families and women in particular stay trapped in a cycle of poverty.  She depicts what was both beautiful and sorrowful growing up in this region.

However, Smarsh’s New York Times op-ed “Something Special is Happening in Rural America” offers a more upbeat view of what’s going on in rural areas across the country. She reports “a prairie trend of young people, drawn by family ties and affordable entrepreneurship, returning to rural and small-town homes around college graduation. They’re opening restaurants or starting small, unconventional farming operations.”

We met these folks in the Flint Hills, starting with our tour guide, Casey Cagle, owner of Prairie Earth Tours. He grew up in the region, traveled the world as a tour guide for other operators, then came home to start his own business.

Drive just a few minutes from the Wichita city limits and you’ll find yourself in farm country.  We stopped at Elderslie Farm on our way to the Flint Hills, a cool place where George Elder (a former teacher) and his family have turned family land into a “small unconventional farming operation” like those in Smarsh’s essay. They offer an array of opportunities for visitors to enjoy “agritourism” at its best.

For example, their family home has become a restaurant  where you’ll see family portraits in the dining room and menus that incorporate regional food. George’s wife, Katharine, is the executive chef. You can pick blackberries, meet their herd of goats and slurp tasty goat milk gelato and outstanding goat milk cheese, too. At Elderslie Farm they also mill local black walnut trees into boards and slabs that architects and carpenters value to create stunning furniture and other decor.

From Elderslie Farm, you may want to stop at Grace Hill Winery in Whitewater which the Sollo family launched in 2008  on an abandoned homestead.  Their wines revolve around cold climate grapes grown on the farm and from other parts of Kansas.

The 23 types of wine they offer tend to the sweet side and come with distinctive names such as their best-seller, Peckerhead Red, as well as Dodging Tornadoes, Flatlander and Cloe’s Cuvee (named after the family dog) with equally clever labels to match.  For me, the dryer white Vignoles offers more crisp and fruity appeal. They’re happy to sell you a few bottles to take along on your trip.

The Flint Hills run through Kansas roughly from Wichita in the South to Topeka in the north.  In the southern Flint Hills, you’ll find Tallgrass Prairie National Preserve, which the National Park Service operates in partnership with the Nature Conservancy.

This 11,000 acre preserve is a portion of the vast tallgrass prairie that once covered more than 170 million acres of the United States, from Indiana to Kansas and from Canada to Texas. Nearly all of it is gone, plowed under for agriculture or urban development. Of the roughly 4 percent that remains today, about two-thirds survives in the Flint Hills of Kansas and in Oklahoma.

Early explorers considered the tall grass prairie “the Great American Desert” but on a park service tour of the preserve, I learned there’s much more going on in the waving grasses than meets the eye.  Stretching 18-to 20 feet deep, the massive root system of prairie grasses–big bluestem, wild alfalfa, switchgrass, Indian grass and buffalo grass–sequester more carbon than a forest.

Author William Least Heat-Moon wrote in great detail about this section of the prairie in his 1991 book, PrairyErth (A Deep Map).  I mean huge detail, so you may want to do some skimming to get through this 600-plus-page volume, but it’s worth it for the background and wry observations that Heat-Moon offers.

Standing in the middle of this sea of grass, one feels as William Least Heat Moon described it, “open to the elements—wind, rain, cold and fire.”

Especially the wind. He says “the grasses are the “offspring of the wind.”   The wind he says, “works to the detriment of trees, but grasses bend and keep their wild parts under ground.” Stretching 18-to 20 feet deep, the massive root system of prairie grasses–big bluestem, wild alfalfa, switchgrass, Indian grass and buffalo grass–sequesters more carbon than a forest.

And, though you’d never expect it, prairies are second to the rainforests in biodiversity. The preserve holds 500 species of plants, nearly 150 species of birds, 39 species of reptiles and amphibians, and 31 species of mammals. It’s a critical habitat for monarch butterflies and prairie chickens, too.  In 2009, The Nature Conservancy and the National Park Service reintroduced bison to the preserve. The herd has reached 100 bison and you may see them on your tour.

Even this small remainder of tallgrass prairie wouldn’t exist if it weren’t for the layers of chert (flint) in the ground here that gave the Flint Hills region its name.  Thankfully, the rocky terrain the Flint Hills region was too rocky to farm, saving it from the plow. However, the rich grasses were perfect for animal grazing, first buffalo, then cattle.  But, without the natural prairie cycle of weather, fire and animal grazing the land would become forested.  That’s why, since the days of the earliest human occupants of the prairie, people have burned the land to renew the grass and keep trees from taking over.

Each spring, Flint Hills ranchers set fire to the grassy land, often dragging a device called a fire stick (basically a long pipe connected to a gasoline tank) behind an ATV. Unlike other regions of the U.S., fire here means renewal, not fear.  In a few weeks, the land is green with fresh grass and the cycle resumes.

See my next post for more on the Flint Hills.

(The striking fire photos at the beginning and the end of this article come courtesy of Kansas Tourism.)