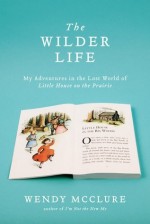 Laura Ingalls Wilder‘s  Little House on the Prairie books and her effort to re-create “Laura World” for herself. So, it was a fun coincidence to read a post on the Algonquin Books blog about An American Childhood by Annie Dillard.  Dillard says of her childhood:

What I sought in books was imagination. It was depth, depth of thought and feeling; some sort of extreme of subject matter; some nearness to death; some call to courage. I myself was getting wild; I wanted wildness, originality, genius, rapture, hope. I wanted strength, not tea parties. What I sought in books was a world whose surfaces, whose people and events and days lived, actually matched the exaltation of the interior life. There you could live.

That describes the qualities that have sent generations of young readers flocking to the Little Housebooks, and surely what sent McClure on her journey into “Laura World.”  What fan of “Half-Pint Ingalls” (who thanks to McClure now has her own Twitter account

@halfpintingalls) hasn’t secretly wanted to venture just a little into Laura World? It was a relief to find someone so quirkily devoted to books and McClure’s descriptions of her attempts at some of the Little House activities—churning butter, for example, or making Vanity Cakes—are hilarious. I particularly enjoyed the chapter where she and her ever-patient significant other, Chris, spend a bit of time on a farm learning do-it-yourself skills that might have been of use in Laura World but it turns out they’ve joined a gathering of fundamentalists preparing for “end times.”

I’m a huge advocate of  reading books to get a better understanding of places one is traveling.  And, a “field trip” to the place where a book took place extends the experience of reading the book. For example, what does fiction such as the Little House books tell us about life in the late 18th century and how does that experience affect us now?  How well would I measure up to the challenges of pioneer life?  How does the Long Winter of Wilder’s experience compare to the long winter I just experienced? I can tell you one thing:  it makes me happy to have central heat and store-bought sticks of butter in the frig.  I’m happy I don’t have to butcher a hog and make head cheese, though I’ve always had a kind of gross fascination with the way the Little House younguns blew up pig bladders and used them as balls.

But McClure also delves into the research about Laura Ingalls Wilder and the dynamics of Laura’s relationship with her daughter, Rose.  She discovers just how far the Little House books deviate from the life of the real Wilders and, (Holy Hoedown!) the suspicion that Rose had more of a hand in writing the books than Laura.

It makes me wonder if there’s a danger in learning too much. It just might diminish the magic of reading in the first place.  The real Laura World doesn’t hold a hand-dipped tallow candle to the world Laura created in our imaginations. I’m going to meet up later this summer with a group of Wilder fans from the Book Vault (see my previous post) in Oskaloosa, Iowa as they hit the Little House hot spots near Minneapolis where I live.  I’ll dip my toes in the water On the Banks of Plum Creek, but my view of Laura World will remain the one in  my own imagination.