The WordPress photo challenge this week is “rounded” which immediately brought to mind my recent trip to Arches National Park near Moab, Utah.  Sculpted by wind, water and time southern Utah is like a geological Disneyland.  It’s no wonder there are five national parks in the region (and some stunning state parks), each quite different but equally amazing.

In Arches, giant rounded rock forms have emerged over thousands of years as potholes near cliff edges grow deeper and deeper until they wear through the cliff wall below them.

We arrived in Moab during the heat of August, with temperatures soaring to 100 degrees.  “Dry” heat or not, that hot!  Consequently, we ducked into a few shops in the afternoon to get out of the heat. One was a terrific bookstore on Main Street in Moab, Back of Beyond Books.  There I discovered the work of the revered environmental writer Edward Abbey. 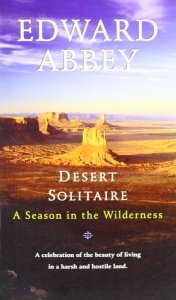 In Desert Solitaire, which I highly recommend for anyone planning a visit to Arches.

Regarded as one of the finest in American literature, the book recounts his time as a park ranger in Arches and his opinions of the crowds that flock to national parks.  He’d be apoplectic is he could see the throngs now in many parks.  Still, if you go at the right time of year and early or late in the day, you too can experience “desert solitaire.”

We trekked out into Arches at night with Moab photographer Dan Norris for a little starlight photography.  Here’s Dan’s amazing photo of the the Milky Way: